Home Blog How Heavy is a Plate? Explained By Personal Trainer
Blog

How Heavy is a Plate? Explained By Personal Trainer 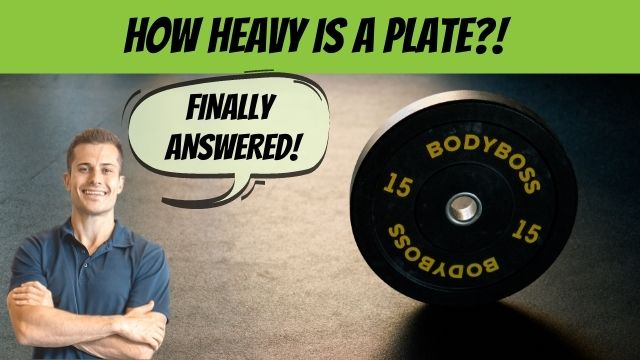 So you’ve started going to the gym to get stronger and fitter.

And perhaps feel a little overwhelmed by the various new contraptions and equipment.

One of which are the weight plates – which come in all sorts of shapes, sizes, colours and materials.

You’ve also overheard other gym goers talking about how many plates they can lift.

So what does all this mean? And actually how heavy is a weight plate?

But this doesn’t explain the many different types and colours you’ve probably seen.

Today, we’ll be exploring weight plates and how heavy they all are in greater detail.

So you can overcome the confusion and lift without fear.

| How Heavy is a Weight Plate?

There are thousands of different companies that make weight plates across the world.

They vary greatly in branding, colour, size, material and make.

This can make it a little confusing and even intimidating when you first step foot in a gym.

But fortunately, one thing that is somewhat consistent when it comes to weight plates is how heavy they are.

In fact, the weight of gym plates is relatively standardised across the globe and is loosely based on the metric system.

Here’s a summary table of the different types of weight plates you’ll find in the gym.

The weights may vary slightly between pounds and kilograms, however, they way they are coloured and categorised remains consistent.

Not all plates will have colours however, and therefore, you may not be able to identify their weight from a distance.

In which case, you can always approach the plate and see the weight written on it.

In almost all cases, you should be able to find it.

Despite the great amount variance in a plate’s weight, there are many gym goers that refer to ‘how many plates they lift’.

Typically, they will be referring to the 20kg, or a 45lbs plate, as well as including the weight of the Olympic barbell.

Here’s a table below to help you quickly calculate your weight lifted based on how many plates you’re using.

There are generally three types of weight plates in the gym – standard plates, bumper plates and metal plates.

The reason for the variation stems from their roots in various sports.

Knowing the context behind each type of weight can help you understand which one to choose when in the gym.

Many people falsely believe that metal plates are always heavier than standard or bumper plates..

(Probably because they look pretty badass, and make more noise when you drop them).

However, the weight of a plate is entirely dependent on its individual weight, not what it’s made from.

Standard plates are the most common type of plate in a commercial gym setting.

They are used to be loaded onto barbells or plate machines, such as the leg press or hack squat.

Standard plates have a metal interior and plastic exterior and cannot be dropped from a height (unlike bumper plates).

They can be identified by their black exterior, but can sometimes have a hint of colour somewhere on them so that their weight is identifiable from a distance.

You should only use standard plates when you are performing plate loaded machines and rack-based barbell exercises. They should not be used for exercises such as Olympic lifts that involve high velocity dropping. Bumper plates are traditionally used in Olympic weightlifting during the clean, snatch and their derivatives.

This type of plate have a metal interior and rubber exterior and are designing to be able to withstand being dropped from a height.

Bumper plates can typically be identified by their full colour exterior.

You should use bumper plates primarily for floor based barbell movements and Olympic lifts and their derivatives. Metal plates are traditionally used in Powerlifting, a sport that demonstrates one’s maximal strength in the bench press, squat and deadlift.

They vary in weight from 0.5kg (10lbs) to 25kg (55lbs). Occasionally you will find 50kg metal plates in strongman competitions, but these are very rate.

Metal plates are typically made entirely from cast iron, with no rubber or plastic casing on the outside.

They are not designed to be dropped, instead, come to a complete, blunt stop upon reaching the ground.

You should use metal plates primarily for powerlifting based movements such as the bench press, squat and deadlift. | How Accurate Are Weight Plates?

When you’re adding up weights, it’s important to consider that they might not be 100% accurate.

So, actually how accurate are weight plates?

Weight plates can vary in weight up to 0.5-1kg (1-2lbs) between those that are identically labelled. Variation in weight is more common in heavier plates (e.g. 25kg plates), as well as between different brands.

In saying this, for most recreational gym goers, this shouldn’t be a big issue.

In fact, in my 10 years working out in the gym and several years as a fitness coach, I have never faced a problem when it comes to weight discrepancies.

Some advice online suggests weighing your plates on the gym scale to check what weight they actually are – however – I personally find this impractical and unnecessary.

As long as you stick to the same brand of weight on each side as well as the same measurement metric (e.g. lbs OR kg’s), you shouldn’t run into any trouble with imbalances.

| What is the Heaviest Weight Plate?

If your strength is progressing and you’re starting to lift multiple plates, you might be facing the dilemma of many getting plates on and off the barbell.

It can therefore be advantageous to instead choose a heavier plate.

It’s got your wondering, what is the heaviest weight plate in the gym? Is it 45lbs or not?

Using the red plates can offer a real advantage if you’re hoping to load less plates onto the bar, saving you time and effort during those heavier lifts.

Dan is a futuristic thinker, instinctive motivator and deep relationship builder. He completed his studies in exercise and sports science at Deakin University in 2016. Dan then worked as a strength & conditioning coach at Melbourne Girls Grammar School while founding and growing this website, Get Gym Fit, which now impacts tens of thousands of people each month.

How To Do Chin Ups: Proper Form, Benefits,...

How To Do Rack Pulls: Proper form, common...

How to Tone Arms and Finally Get Rid...

Our Free Newsletter Will Help You Lose Weight & Tone Up.

Every Friday we email 1,128 people just like you with top tips, insights and case studies to help you get in the best shape of your life!